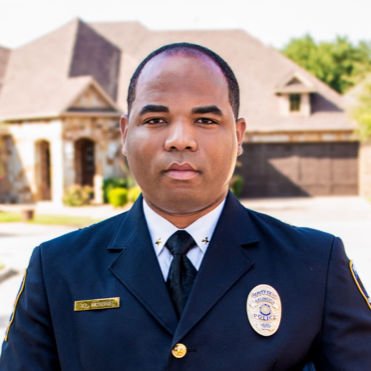 A native of Dallas, TX, Tarrick McGuire began a career in public service with the Arlington (TX) Police Department in 2003. During his tenure, he has served in multiple positions before being appointed to Deputy Police Chief in 2018. As a nationally recognized public speaker and published author, Chief McGuire has been a leading authority on community-police relations, evidence based policing, police reform and improving public policy. In 2020, he was appointed to the Council on Police Reform and Race by the National Police Foundation out of Washington, DC and serves as chairperson of the International Association of Chiefs of Police Juvenile Justice & Child Protection Committee.

During his career, Chief McGuire has been at the forefront of developing innovative strategies, leading national change in community police relations impacting lives globally. In 2015, he developed and piloted a community engagement model in his local community to build relationships between youth and the police. The Mentoring Arlington Youth model reduced racial disparities in arrests and school discipline and is a national model to build public trust. In 2016, Chief McGuire served as a law enforcement fellow with IACP contributing research and technical assistance to U.S. police departments on 21st Century Policing in Washington, DC. During this
time, Chief McGuire worked with the Department of Justice COPS Office, Obama Whitehouse Administration, and CNA to improve policing practices, policy, and community-police relations nationally.

As a pracademic and change agent in policing, Chief McGuire was recognized by the IACP as one of the top 40 under 40 most progressive police leaders in the world. Although he has received many accolades, he is most proud of the Anthony L Sutin Department of Justice COPS Office Award for his work in community police relations and the Martin Luther King Jr. Award for Governmental Leadership.

Chief McGuire has earned a B.S. in Speech Communications from Oklahoma State University, and a M.A. in Christian Leadership from Criswell College, and a Doctor of Public Administration from California Baptist University.